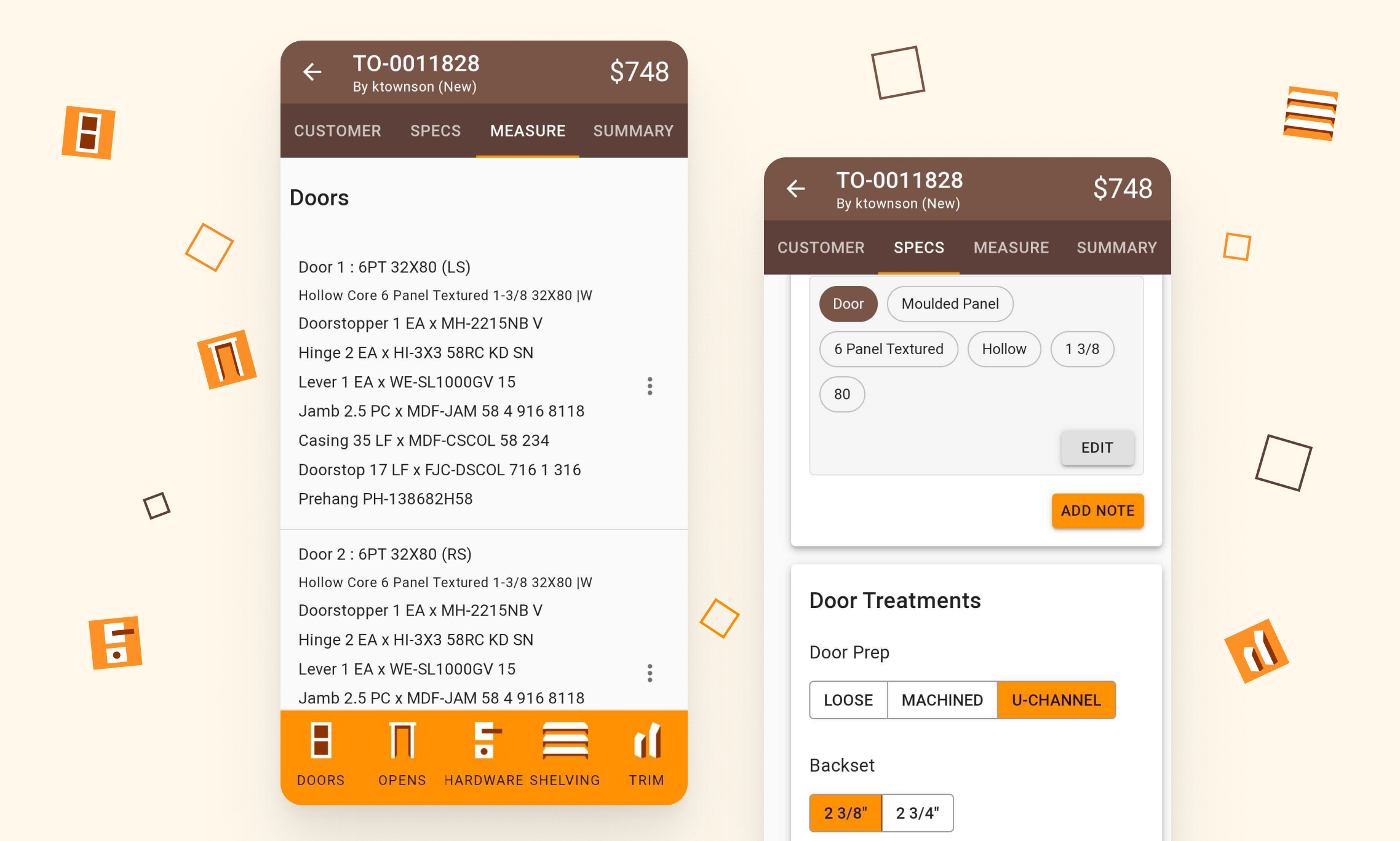 Replacing a tedious, paper based estimation process with an app

Mario Gianniotis has an incredibly exciting job as co-founder of Waterloo, Ontario based Riverside Millwork Group (RMG). Giannotis oversees a vast operation of manufacturing, supply and installation for home woodwork products with his family-run company that’s grown rapidly over the last 12 years.

Estimating the cost to build and install construction materials accurately is difficult, as Mario knows oh so well. The standard for innovation in measurement has always been the paper take-off form, which is written up in the field before it is handed off to order entry staff at the plant to key it into systems. Not only are paper forms prone to illegible information, but staff training is also a challenge as the form is typically unique to every company.

An Introduction to Ready Set Go

In 2017, Ready Set Go's Co-Founder, Dayton Pereira, met with RMG to hear Mario's vision for increasing their productivity and revenue on client projects by converting to a digital-based estimation system. RMG supplies thousands of construction projects every year, both commercial and residential.

Dayton was mesmerized by Mario vision and passion, but Dayton first needed to understand the scale of those construction projects and how RMG staff completed the take-off form in the field. To walk-the-walk, Dayton grabbed a pair of steel-toe boots and a hard hat and then shadowed RMG supervisors and crews on various construction projects.

Dayton then led Mario and his team through a design ‘sprint’ (i.e., how Ready Set Go approaches complex design challenges) to decide how to build RMG’s estimation tool. Dayton had 1 week to design the UX and present it to RMG. What started with RMG’s paper-based order form as the problem to be solved quickly evolved into a low fidelity sketch of the product Mario has dreamt up.

RMG’s pen and paper-based construction estimates were prone to human error, costing the company time and money on orders.

Remember, this process was repeated day in, day out, for hundreds even thousands of orders. The business impact was painful. Beyond lost margin, it was wasted productivity, which ultimately affected staff morale for the entire company.

The time RSG and RMG spent in the field together proved invaluable and resulted in Mario's vision becoming closer to being a reality, The Takeoff app, which automated each step in RMG’s estimation process in real-time. Effectively, this solution not only removed human error from the process but the humans themselves (who were retrained and deployed elsewhere in the business).

Now, no one at Riverside Millwork Group has to think about which doors need drilling anymore or whether a home comes installed with plain or sprung moulding when preparing an estimate. With Takeoff, each product added to a particular project comes directly from a database of skills and products. This meant that RMG could now create virtually error-free estimates about 3-to-4 times faster.

“Before, when Riverside Millwork worked on an entire subdivision with a hundred homes on each block, you had to look at the nuances in every single house,” Dayton says. “Now, with Mario's vision coming to life as the Takeoff app, you can just walk right in.”

Ready Set Go shared the Takeoff app prototype with Mario, who tested it himself. Mario also provided feedback from RMG staff, business partners and the company’s vendors, who grasped the efficiencies and scale his company could achieve through the digital transformation. Three months later, RMG gave Read Set Go the green light to develop the app, which was first released in 2018.

Beyond the innovation to it business operations, the software alleviates stress on the human side. There are significantly less estimation errors and staff who use the app feel a lot more confident with their order accuracy.

Three years later, Mario's passion and commitment to The Takeoff App knows no bounds, with lots of new features in the pipeline.

Learn how it started with a click-able prototype

How Backyard Camp helps thousands of families during covid-19

How to move fast with No-Code

A recap video on the No Code TO event